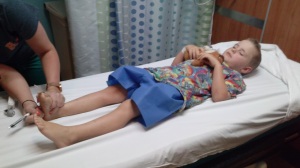 One year ago today might possibly have been the longest day of my life (and my family’s life) to date.  Not just because it started before the sun came up, but because one year ago today we had to trust my son Cole’s future into the capable hands of a team of doctors and nurses under the watchful eye and guidance of God.

It would be a difficult task to encapsulate all the thoughts, feelings and emotions of June 19, 2014.  If you’d like to go back like I did today and read up, just click the “Family Life” category and scroll down to the bottom.

But here we find ourselves a year later.  A year that started with a major surgery, a long week of recovery in the hospital, a near full body cast, a summer in Birmingham, a modified wheelchair, cast removal, a regular wheelchair, an immobilizer, a walker, physical therapy, conditioning, numerous follow-up appointments and x-rays, special shoes… and that’s just the medical side.

And here we were a year ago going into this surgery not knowing what Cole’s future would hold.  Would he have to re-learn how to walk?  Would he be able to run again?  Would a ‘normal’ childhood be possible?  Would he be able to play sports?  What kind of future and life would he have?  There is no way that we could say we didn’t think about these and many more questions, but I can honestly say that we truly had a supernatural peace and confidence that we were praying to a God who not only had the answers, but was orchestrating (and still is) Cole’s life and future.

So here we sit a year later amazed to report that not only can Cole walk, but he runs – neither without a limp – but it doesn’t seem to slow him down much at all.  Cole played on his first soccer team and had a great time (and I had a blast coaching).  He also played on his first real baseball team – and played up a league on Jake’s coach-pitch team that I had the privilege to coach.  And now this summer he has joined a swim team, which has not only been fun, but was doctor recommended as a great tool in the movement and healing process of his hip.  He started his year of Kindergarten with a walker and finished walking (on his own) across the stage to get his Kindergarten diploma.  We would have never imagined this sitting in that hospital waiting room last year. 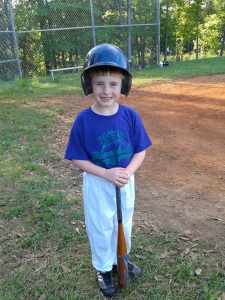 To look back on this last year is a bit overwhelming.  It has been emotional just thinking back, reading old posts and writing this one.  It has been a whirlwind of a year and none of us could have expected the outcomes of this journey.  And we’re not done yet… we still have a ways to go in this healing process.  We’ve got another surgery (hopefully only one) in our future.  We have another 4 years of healing and growth to monitor with regular visits to Dr. Killian.

But we’re here.  We didn’t know where here would be one year ago.  But the same God that flung the stars into space and rules and reigns over this world cares about a little 6 year old boy with a rare childhood disease.  And He cares about you too.  You’re not just a number in a sea of 7 billion people.  He knows you by name.  And your journey may have an unexpected diagnosis or other curves in the road.  But you can rest assured that nothing that comes our way doesn’t pass through the guiding hand of a loving Heavenly Father.  We take great confidence that He holds Cole’s future… and all of ours for that matter.

I ended today with Cole the same way we started our day one year ago today… in prayer.  Our prayer was much different tonight than it was a year ago.  But it had a common thread… “God, you are good and trustworthy and Cole is in your hands.”  That was true a year ago and that is true today.  We praise God for His faithfulness to Cole and our family over this past year.  And we are grateful to each and every one of you for standing with us, praying for us and supporting us this past year!

0 thoughts on “Looking Back: One Year Ago Today”